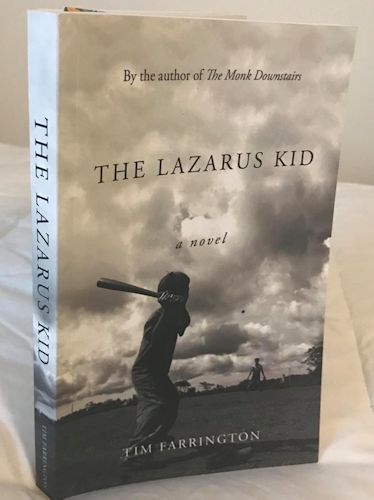 An angel has come for eight-year-old Alejandro Rodriguez, but he is the only one who can see her. For Michael Christopher, a former monk now working in the St. Luke's Mission hospice, the angel is not really the point. All Mike knows is that he is not going to make it to his step-daughter's gymnastic meet tonight, because this is almost certainly Alejandro's night to die, and it is his job to help the boy do that as mercifully as possible. The rest is in the hands of God. But God, it seems, has something else in mind. In the third book of the series including the bestselling The Monk Downstairs and The Monk Upstairs, The Lazarus Kid is a story of the depths of faith and love, of parents and children and marriage and grief, and of life, and death, and life - mysteriously and miraculously - again.

I am a huge fan of Tim Farrington, having discovered The Monk Downstairs a few years ago, followed by The Monk Upstairs, and then concluding with every other book Farrington has ever written before re-reading the Monk books again (and maybe again). So when I found out he had written another book, I got it and started reading immediately.

The follow-up to the first two Monk books, The Lazarus Kid does not disappoint. Farrington’s beautiful descriptive writing paints each scene, placing a microscope on some points or aspects of certain scenes, and panning way out for a broader view in others. Farrington has a way with believability, offering details that breathe so much life into each event, it’s almost as if you are right there inside the scene instead of just reading the story from a page.

The characters have evolved since the first two books. Mike is still contemplative and spiritual in both mind and mannerisms, but we now see him in a deeper role as a father and stepfather – even if much of his parenting is done at a distance due to chaos on the job. Rebecca is a better mom than I am of a precocious teen, handling infuriating circumstances with clenched fists and outward grace. And Mary Margaret is every bit the rebelling teen, though I never once found her character to be cliche. Rather, I saw my own teen daughter in her (hence, my awe at Rebecca’s skills of keeping a level head).

Of course, there’s so much more to the story, but I don’t want to offer any spoilers at all. Just know that when you read anything by Tim Farrington, you’ll never be disappointed. I can only hope that Mr. Farrington has more books up his sleeve very soon.