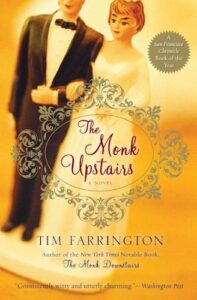 In this sprightly sequel to The Monk Downstairs (2002), Tim Farrington begins with the marriage of Mike, an ex-monk who works at McDonald's and prays a lot, and Rebecca, a divorced graphics designer with a seven-year-old daughter, Mary Martha, and a mother, Phoebe, who is still suffering from the repercussions of a debilitating stroke. The couple escapes San Francisco for a luxurious honeymoon in Hawaii where they savor a week of pure leisure and love-making. When they return, Mike begins a job search. The qualities which make him such a find in marriage don't matter at all in the work arena: his reserves of silence, tenderness, and unselfishness.

Mike's delight in being married to Rebecca is full and complete. He discovers that the monastery was a good training ground "for simply being decent with someone on a daily basis." They do bump heads with each other over religion since she is a lapsed Catholic and he still regularly goes to Mass. Rebecca isn't too thrilled when her daughter decides to go with him to church. Later, when he wants to have her baptized, Phoebe shares the news that she did an improvised baptism service in the bathtub years ago.

Mike finally gets a job at a hospice for homeless people. He has a heart-to-heart talk with Phoebe, who tells him she wants a beach party for her memorial service with kids, dogs, and lovers all cavorting together under a sky filled with balloons.

The Monk Upstairs is an enjoyable read with interesting and engaging characters who spur us to think more seriously about the manifold meanings of love, faith, and death.